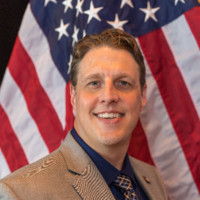 Chad Dorsey serves as the Maritime Administration’s Director of the Inland Waterways Gateway Office in Paducah, Kentucky.  Prior to this current role, Dorsey has served many roles within the private maritime sector.  As a navigation officer, he spent eight years in the merchant marine, visiting over 25 foreign ports of call and delivering food aid through what is currently known as the Food for Peace program.  He then transitioned to a shore-side career to serve as the director of operations in one of the nation’s largest dry bulk terminals.  During this time, he received a CEO-designated “Bravo Zulu” award for dedication and outstanding efforts during Hurricanes Katrina and Rita.  Dorsey has held various management roles in operations and engineering within the inland industry, including that of senior director of commercial operations and logistics, as well as roles in transportation consulting and business development.  He was named to the International Propeller Club Board of Directors in 2015.

Dorsey holds a Bachelor of Science degree in marine transportation from the United States Merchant Marine Academy.  Following graduation in 1997, he served eight years in the United States Naval Reserve.  Dorsey and his wife, Elizabeth, reside in Paducah with their three sons William, Thomas and Teddy.