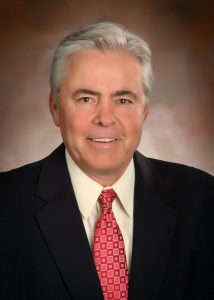 Prior to joining ACBL, he was vice president of American Electric Power’s (AEP) Fuel, Emissions and Logistics Group and president of AEP River Operations, having joined AEP with its 2001 purchase of MEMCO Barge Line. From 1984 to 1994, he was owner/operator of The Mark Twain Towing Company and Delmar Marine Inc., Pekin, Illinois. Knoy began his career in 1973 working aboard towboats on the inland waterways as a deckhand and then as a captain.

Knoy serves as a director of the Corps of Engineer’s Inland Waterways Users Board, a Board of Trustees member for both the Coast Guard Foundation and The Seamen’s Church Institute and its Center for Maritime Education and Ministry on the River, chairman of the National Waterways Foundation, board member for the H.T. Pott Inland Waterways Library at the University of Missouri – St. Louis, treasurer of the Marine Transportation Council and former member of the Board of Directors for the Fund for the Arts and the Boy Scouts of America, Greater St. Louis Area Council. He is a past chairman of both the Waterways Council Inc. and the Midwest Region of the American Waterways Operators.

Mark lives with his wife, Mary, in Louisville and together they have three grown children.